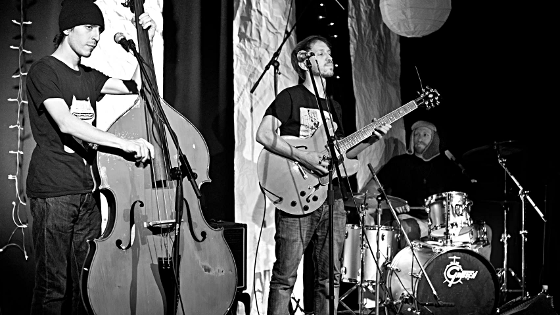 Simulakra is a band fusing a broad spectrum of middle eastern music, balkan, Latin and more while pouring reality based and fictional story-like texts, generating a full-on energetic show and well detailed composition.

The group was founded by Jazz academy graduates and accomplished musicians Avner Cohen (Double Bass) and Michael Glucksmann (Guitar) who joined with Ivan Ceresnjes (Percussion) in Jerusalem 2013. At the same year the band recorded a 3-song EP, performed in several venues in Jerusalem and moved to Berlin, Germany.

The band has independently produced and released their 2nd EP, which was recorded in Tel Aviv at The Slick studio by Yuval Gerstein on December 2016 and was promoted by touring Germany and Israel on summer 2017. The 3rd EP recordings are planned for April 2018.